People sometimes refer to Christmas in July. This year it is more like May at Christmas. The record warm temperatures have lasted all week, but it has been very damp. I did some brief walks in the park on Saturday and Sunday. The birding was pretty quiet. I did hear Carolina Wrens calling, plus a White-breasted Nuthatch, but otherwise very little activity in the woods. On Sunday, in the bay off the soccer fields at the north end of the park there were three Northern Shovelers (2 males, 1 female). They are certainly not the first I have seen in the park, but we don't get them too frequently. They are much more common down in Central Park.

As usual there were, of course, lots of Ring-billed Gulls around. The one below was photographed at low tide on Saturday by Muscota Marsh.

Finally, one of the "Black" Gray Squirrels decided to pose irresistibly.


Posted by Joe DiCostanzo at 6:58 PM No comments:

After hearing about it for a week; after seeing reports on it in the New York Post, the New York Times, and on local CBS News, Ann and I finally got to Brooklyn to look for the now famous male Painted Bunting in Prospect Park in Brooklyn. We took my sister Toni to search for the bird. It was not much of a search. All we had to do was look for the crowd of birders ad other interested people near the Lefrak skating rink and there was the spectacular stray from the south! Toni even managed to get some pictures of the bird, though it was not as cooperative as it has been for others at times.

We were also lucky enough to see, late in the day, the subadult Black-headed Gull that had been found in the morning by a birding group from the Brooklyn Bird Club.

Rounding out the day was a pair of Great Horned Owls at an undisclosed Brooklyn location. 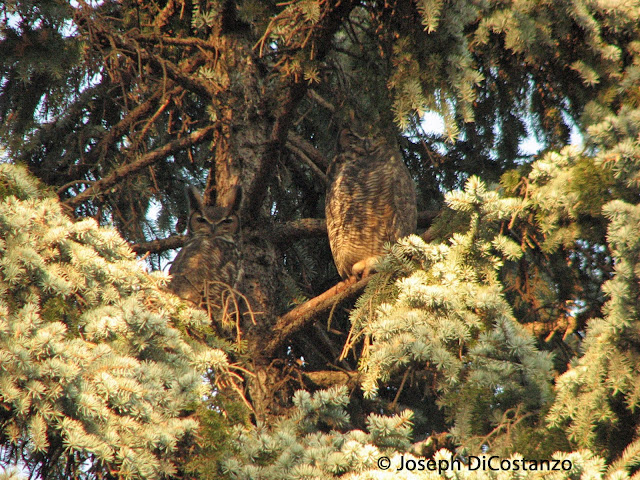 Quite a Brooklyn birding spectacular, and an amazing first day of birding for my sister, Toni!
Posted by Joe DiCostanzo at 8:03 PM No comments: