August 11 - Bridled Tern and other birds on Great Gull Island

There continues to be a pretty good seabird show around Great Gull Island. It is not as spectacular as in recent weeks but compared to most years it is very good. The star continues to be the adult Bridled Tern hanging out at the northeast corner of the island. This tropical species, whose closest nesting colony is in the Dry Tortugas at the end of the Florida Keys, has now been here for nine days. It is possible it has been here longer since we don’t go to the eastern end of the island every day at this time of the year. Pictures of the bird can be found on my posts for August 3 and August 5. Since Sean Sime first spotted it I have made at least one trip a day to check that it is still here. Usually it is just a quick visit to the north side of the Big Gun Emplacement and once I see the Bridled I leave the area.


The shearwater show has slowed considerably, especially since last Sunday. Most days this past week there have only been a handful seen each day. Today, however, the stormy weather and easterly winds have picked up the numbers again. In the morning, watching from the Dock Blind I could see a number of shearwaters flying around the fishing boats in the Race between Little Gull Island and Fishers Island. Originally, Cory’s Shearwaters predominated, easily outnumbering Great Shearwaters. On August 3rd the relative numbers started to shift and now it is about five to one Greats over Cory’s. Around sunset Helen and I were watching from the Dock Blind again and two Great Shearwaters came in fairly close to the island on the north side west of the old dock. I got a few pictures, but the light was dim. 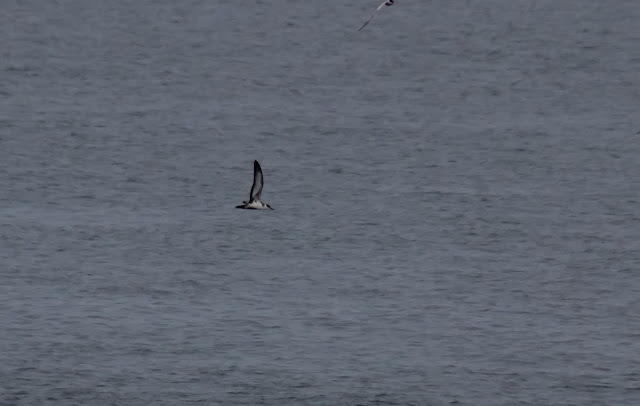 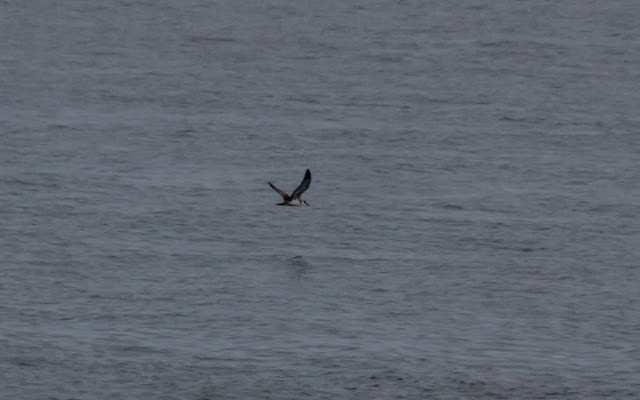 One of the highlights of the afternoon and early evening were the Parasitic Jaegers that at time chase the feeding terns west of the island. In the late afternoon I spotted three Parasitics west of the island – it looked like two adults and an immature. I have seen a group matching this composition periodically over the last ten days. Late in the day there was an immature Parasitic and a dark phase Parasitic west of the island. In addition to the island’s Common and Roseate terns, and the visiting Bridled, a molting adult Black Tern came by towards evening making it a four tern day.
Around sunset a school of Striped Bass or possibly Bluefish was feeding on the surface just west of the old dock. The terns took advantage of the baitfish being drive to the surface by the larger predatory fish. From the Dock Blind you could hear the larger fish slapping the surface of the water. 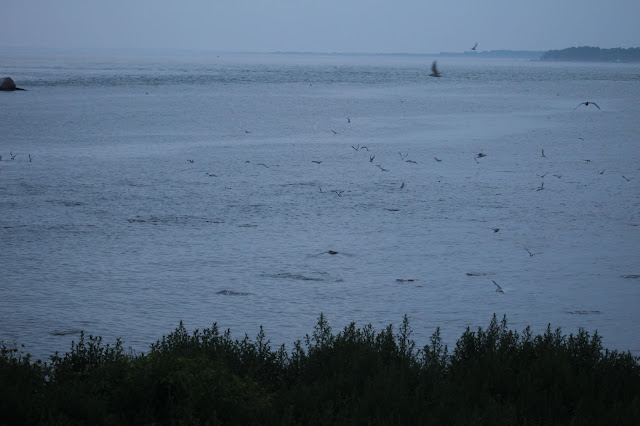 The day also had one of our larger varieties of shorebirds recently. The island’s nesting Spotted Sandpipers are still here as well as a family of three American Oystercatchers that nested on the west end. In recent weeks there have usually been two to five Ruddy Turnstones (three today) feeding in the kelp on the shore west of the north building. Some days the turnstones are joined by Least or Semiplamated sandpipers. Today two Leasts were there and a small flock of sixteen Semis flew by. Other shorebirds seen recently have been Greater Yellowlegs, Sanderlings and Short-billed Dowitchers, but none of those were seen today. The shorebird highlight of today, however, was a group of three “Western” Willets that flew into the north rocks on the western side of the island and started looking for food. Willets have been seen on the island in the past, though uncommonly. This is the first time the “Western” subspecies, a potential split into a separate species has been identified on the island. They have no doubt occurred in the past, but were just called Willets and no effort was made to distinguish subspecies.


Finally, I should mention Fred. Fred is a Fish Crow that has been hanging out in the pines on the island since early June. At some point I named him Fred. Helen now feeds him island leftovers. However, every time he ventures out from the pines the terns attack him, so except for brief dashes out for the food Helen leaves at the bird feeder, he generally just sits in the pines and calls occasionally.
Posted by Joe DiCostanzo at 5:20 AM 2 comments:

The other night as I was going to my room to go to bed I noticed some “Burying Beetles” working on a small dead fish in the path. It had been years since I last saw these fascinating creatures out on Great Gull Island. The American Burying Beetle (Nicrophorus americanus) is an Endangered Species and I did not know enough about them to know if the one I had encountered were this rare species or a related species. One of the last strongholds of the American Burying Beetle is Block Island, Rhode Island. Block Island is within sight of Great Gull Island, so there was a possibility that these were the endangered species. Burying Beetles are nocturnal creatures. They bury small dead animals on which they lay their eggs so that the young can feed on this carrion after the eggs hatch.


So yesterday afternoon I put out some small dead fish in the path that I had seen the beetles at work the other night. It worked like a charm. Last night as I headed to my room, I found each of the fish I had put out was being worked on by several beetles. I got my camera and took flash pictures of a number of them hoping to identify them today. With the help of the limited reference books we have on the island and the Internet I was able to tell that they were not the endangered American Burying Beetle. I believe they are a closely related species in the same genus, Nicrophorus orbicollis, whose English name is Roundneck Sexton Beetle. The American Burying Beetle is larger and is distinguished by a large orange patch behind the head. Below are a couple of my pictures of the ones on Great Gull working on the small fish I had left for them. 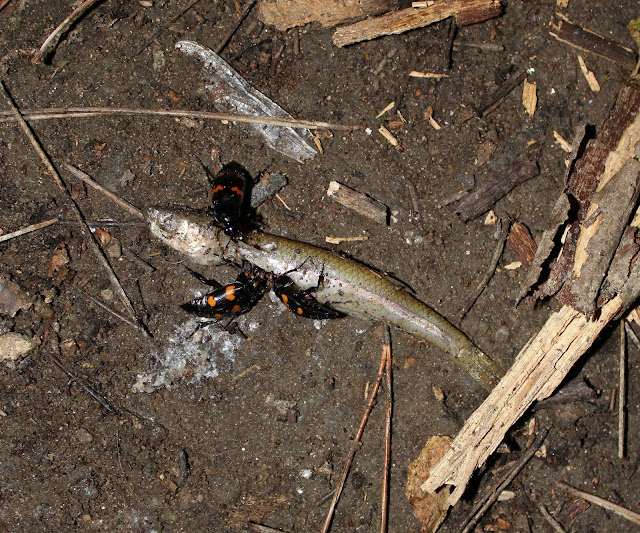 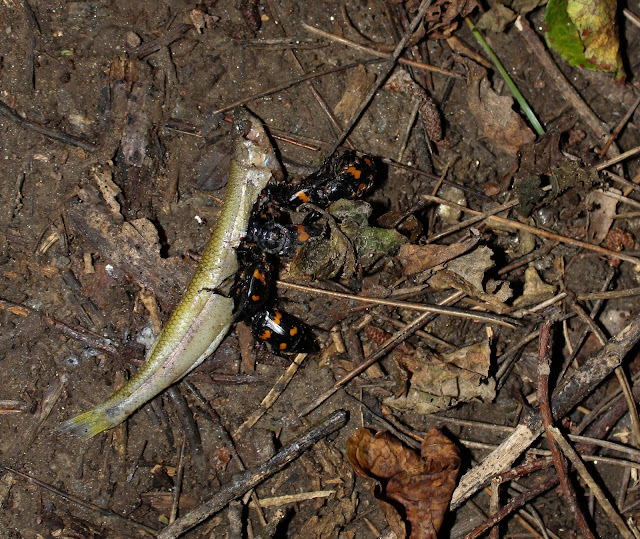 Posted by Joe DiCostanzo at 12:05 PM No comments:

The adult Bridled Tern first spotted on Great Gull Island on August 3 continues to frequent the same northeast corner of the island. While the island is not open to casual visitors I have received inquiries from birders about where exactly on the island the bird is generally seen. People want to try to spot it from the lighthouse tour boats that go by the island. At least one birder was apparently successful. Below is a map of Great Gull with the area the Bridled usually hangs out indicated in RED. Obviously, the bird goes out to feed sometime, but I do not know its schedule or where it goes. When present the bird is often resting on the upper rocks in the area indicated or flying around in that vicinity.


Posted by Joe DiCostanzo at 5:56 AM No comments: 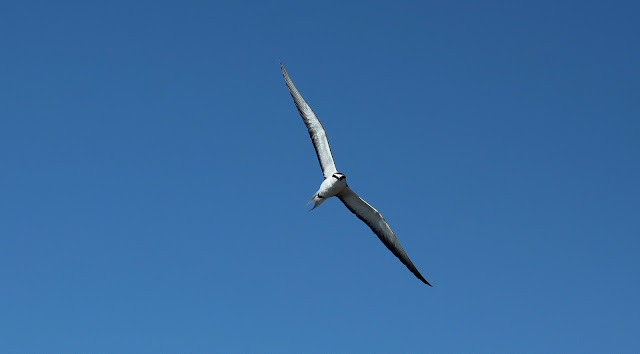 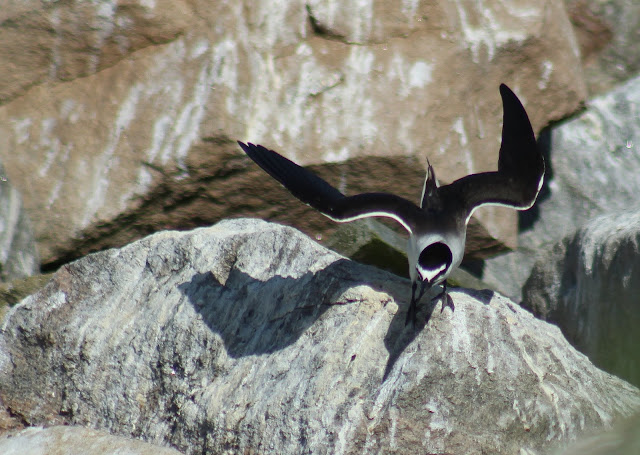 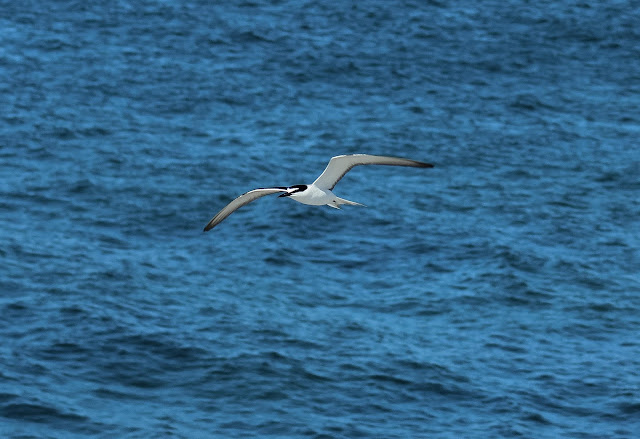 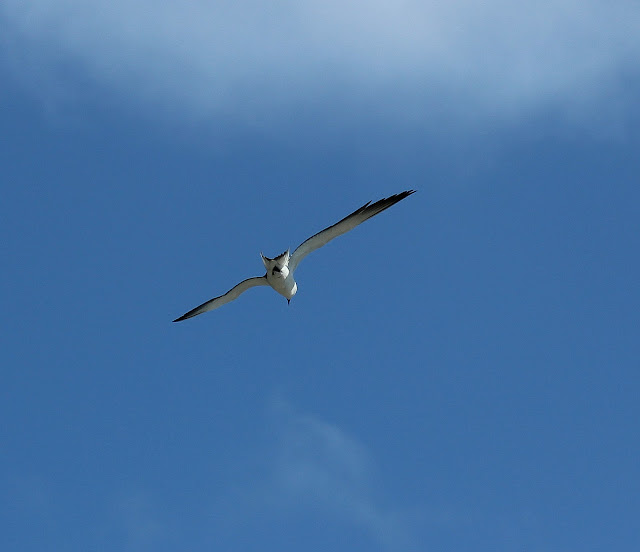 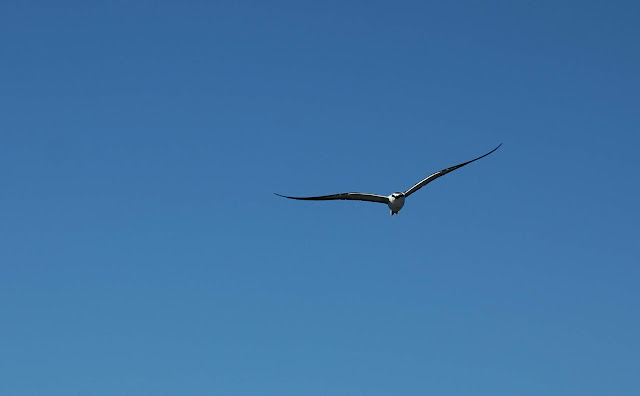 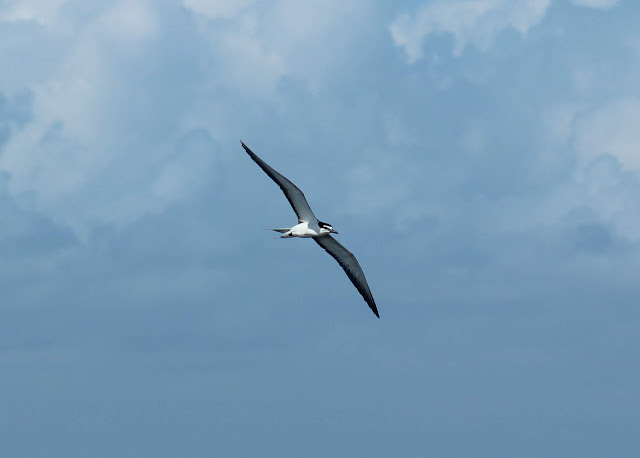 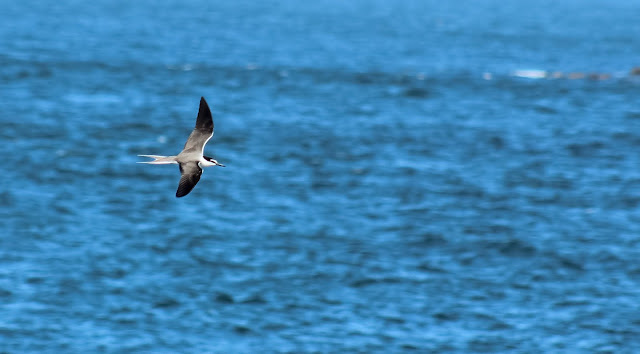 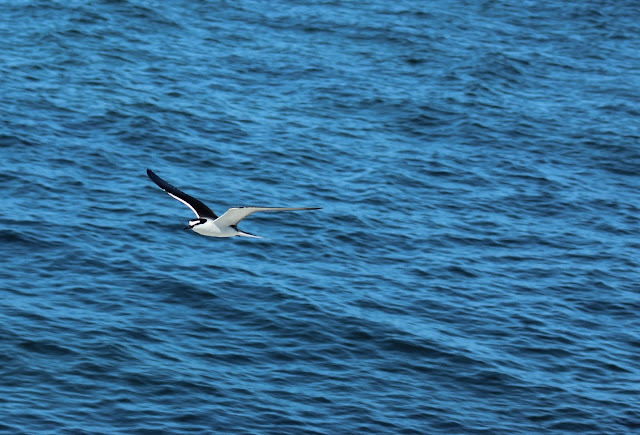 Posted by Joe DiCostanzo at 11:10 AM No comments:

For the third summer in a row a Bridled Tern has appeared on Great Gull Island. It is almost certainly the same bird. This year it was first spotted by Sean Sime it was in the dock blind. He called me from there to say he had gotten a glimpse of a bird that might be a Bridled disappearing behind the rocks on the northeast side of the island. I offered to go take a look. I found the bird flying around in the same area it had frequented last early-September. Sean and his daughter Genna came out to see it when I called him to confirm that the Bridled was there. When it landed on the north rocks, it was probably only about ten yards from where I had photographed it last year.


Posted by Joe DiCostanzo at 9:41 AM No comments: