Quite a day! I certainly would never have predicted the day's ending in the morning. I birded Inwood Hill Park for a few hours in the morning, but I will return to that later. First I am going to skip ahead to the incredible end of the day. After birding Inwood I went down to the office. I heard reports from Central Park that there were lots of warblers being seen, but did not get a chance to go into the park at lunchtime. At the end of the day I took the subway home. I happened to look out my apartment window and spotted the winter plumaged Red-throated Loon in the small bay off Muscota Marsh. This bird has been present for over a month now, though I don't see it every day. A few minutes after 6:00 pm while I started my dinner my cell phone rang and the caller ID said it was Dale Dancis. I thought she was calling about an unusual plumaged House Finch she had encountered in Central Park earlier in the day that we had spoken about earlier. Instead, I was stunned when she said that a Kirtland's Warbler had been found in Central Park and was still being seen! The bird was on the park drive between West 90th and 91st Streets. If I got there as quick as I could, I should still be able to see the bird before it got dark. Finding it would be no problem. All I had to do was look for the mob of birders and photographers already there. I called a car service and asked Ann to tell them where I wanted to go while I threw my binoculars in my backpack - I didn't even take my camera. Ann later told me I also just left my food on its plate and she cleaned up. Ann had been fighting a migraine all day and did not feel up to the chase. While on the Henry Hudson southbound I got another message from Dale asking where was I? After getting off the highway, I called Dale from the taxi and told her I was only blocks away. The driver was surprised that I wanted to be left off on the park side of the street. I hurried into the park at the West 90th Street entrance and immediately saw the mob of birders, photographers, and curious members of the public wondering what all the excitement was about. Getting up to the crowd people pointed to where the bird had been last seen. Suddenly there was a surge of people towards the reservoir as the bird moved lightly east and downhill. I joined the move and quickly caught sight of the bird. The only reason it wasn't a life bird was that last August, when Ann and her friend Georgia and I went west to see the total solar eclipse we had gone via Michigan just so I could try to see Kirtland's Warbler in the only known nesting range for the endangered species. After two days of looking I had gotten a quick look at a juvenile. (Ann and Georgia had made the trip two years earlier at a more appropriate time in June.) Now I had nice long looks at this individual. I stayed until it got too dark to see the bird. Enjoying the bird and chatting with the many birding friends and acquaintances who kept arriving in search of this spectacular visitor. The birders were also kept busy explaining to mystified members of the public what was going on with this mob of people staring up into a tree with binoculars and cameras. One of the birders I encountered at the bird was Diane Schenker, who I had birded Inwood Hill Park with in the morning. Since we lived only a few blocks from each other in Inwood, we split a taxi home to Inwood. Below are some poor pictures I got of the bird the next day when I went back down to the park on a wet Saturday with Ann who had recovered from her migraine. 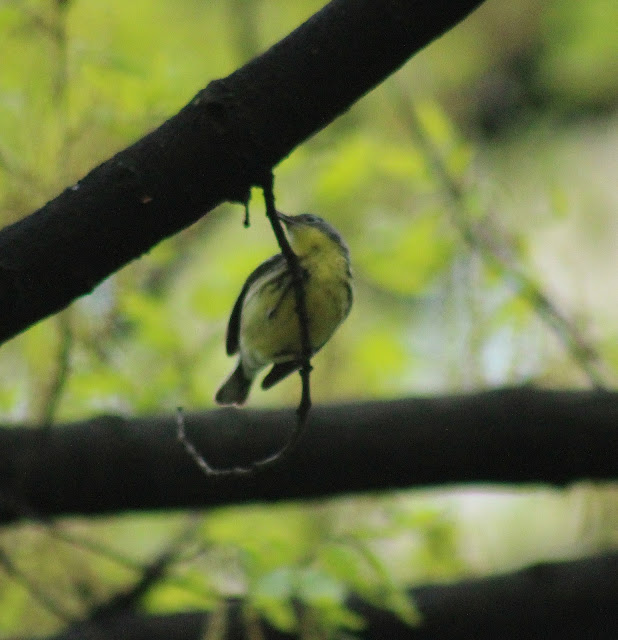 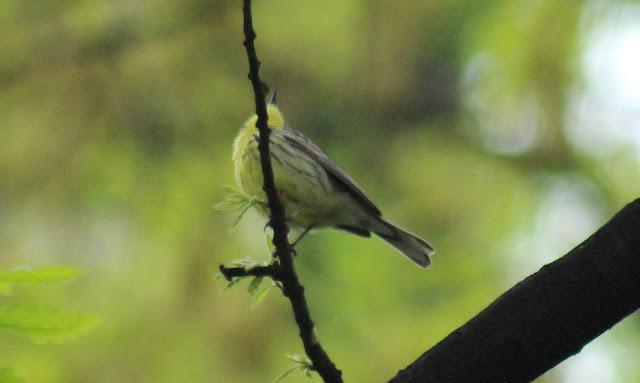 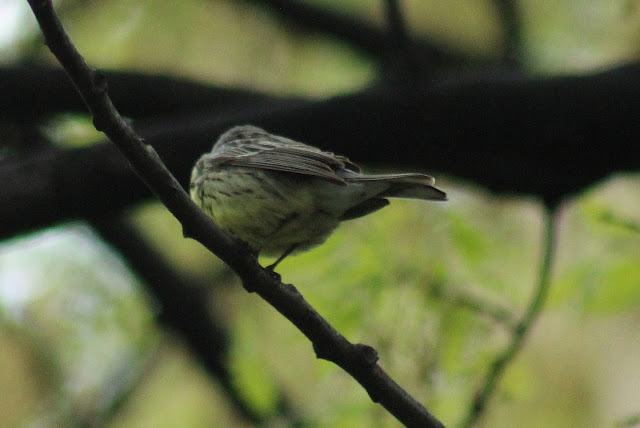 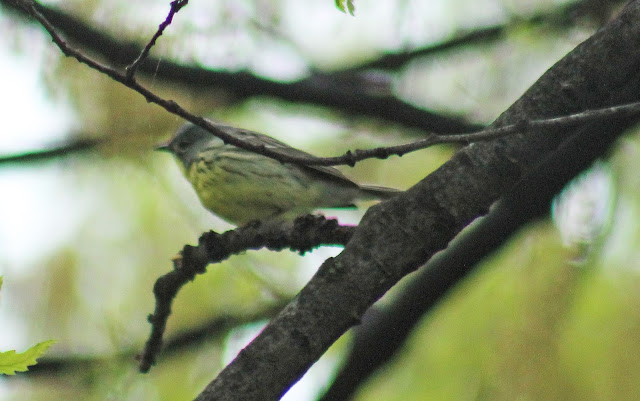 Finally, here is a shot of some of the Kirtland's watchers on Friday evening taken with my cell phone. 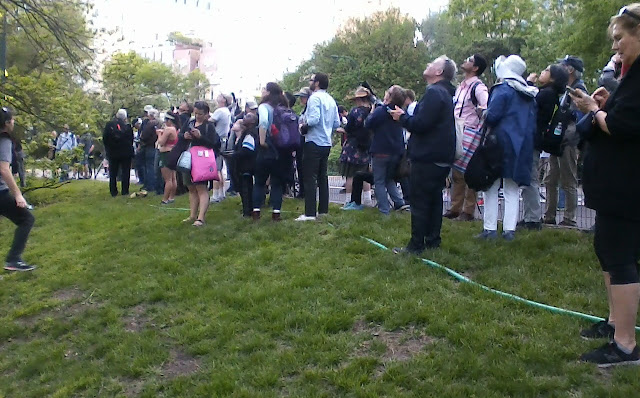 It was due to what had seemed bad luck that Ann and I were in town to see the Kirtland's Warbler. This weekend is the scheduled date for my annual Great Gull Island Birdathon. For about twenty years now we have done the Birdathon each May with our photographer friend Sean Sime. Normally, we go up to Wurtsboro in Sullivan County on Friday afternoon and spend the night there before Sean and I go out for owls and other nightbirds. This year, however, Sean had a photo shoot Friday evening si he could not do the Birdathon with us. Since Ann and I were going to be doing the Birdathon alone, we had a little more flexibility in our schedule and give a rainy forecast for the weekend we decided not to go up to Wurtsboro until Sunday. So, without the bad luck of Sean not being able to do the Birdathon with us, we would have been out of town and been unable to see the Kirtland's. I spoke to Sean on Friday evening after his shoot while he was driving home. On Saturday morning he was able to drive in from Brooklyn with his daughter and they got to see the Kirtland's. So what first seemed like bad luck turned out to be great for all of us!
Posted by Joe DiCostanzo at 6:59 PM