I joined Danny Karlson briefly on the Muscota Marsh deck at 7:30 am this morning to look for the Nelson's Sparrow. A friend of mine, Georgia Rose was stopping by to pick me up before we chased a rarity. I was glad to find the Nelson's Sparrow was still there since it was a life bird for Georgia.
Afterward Georgia and I headed out to Floyd Bennett Field in Brooklyn to look for the Painted Redstart discovered there yesterday. Unfortunately, it apparently had moved on overnight since neither we nor any other birders found it there today. While hunting for the redstart we came across this mushroom, apparently Amanita muscaria, one of the deadly members of its genus. 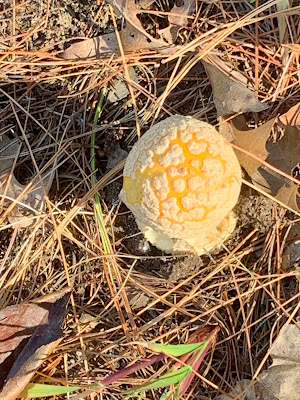 Finally giving up around midday we headed over to Jamaica Bay Wildlife Refuge to look for an American White Pelican that was found there this morning by Andrew Baksh. It was a much more successful search than our hunt for the redstart. We quickly found it on the East Pond where it had been reported,
There were quite a few waterfowl on the East Pond including many Northern Shovelers, Ruddy Ducks, Mallards, Black Ducks, Green-winged Teal, one male Bufflehead and two early Snow Geese. While we scanned the East Pond a Peregrine Falcon flew into the tree over our heads and studied us for a few minutes. 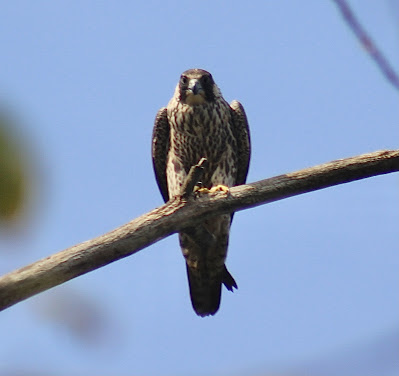 Posted by Joe DiCostanzo at 7:39 PM