The day started out mostly clear and fairly cook with temperatures in the low 40's. Just as they were yesterday afternoon, Pine Siskins were feeding in the plantings (with goldfinches) in Muscota Marsh. 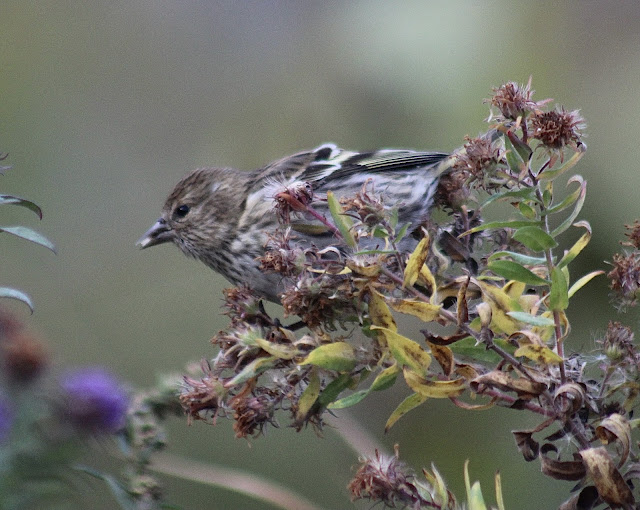 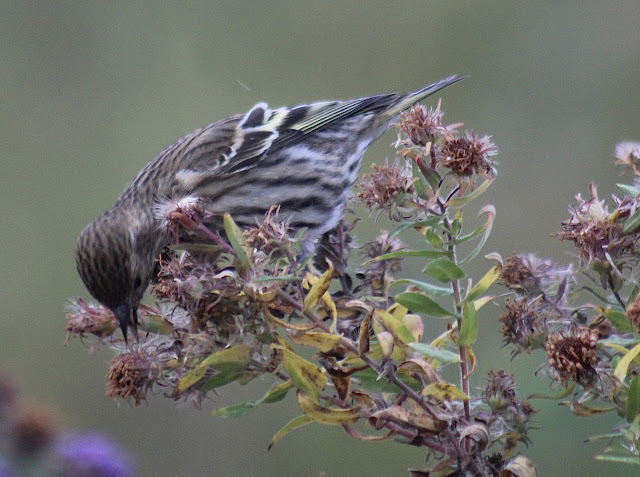 Black-capped Chickadees also continue in good numbers in the park and some were in Muscota. 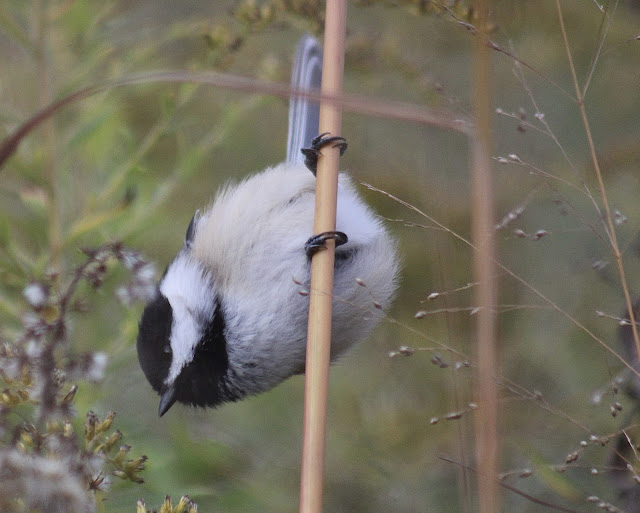 All morning flocks of Brant flew over, particularly over the Hudson. Before getting over to the Hudson I found an American Black Duck and a male Hooded Merganser in the bay north of the soccer field. Danny Karlson, Diane Schenker, and Elizabeth White-Pultz headed into the park though Elizabeth had to leave early. Danny, Diane, and I decided to head over to the ball fields along the Hudson since we heard that birds were being seen flying south along the river. Hilary Russ later joined us over there. We found lots of sparrows and juncos on the fields, particularly at the north end. There were many Chipping Sparrows and Dark-eyed Juncos. Hilary spotted a Nashville Warbler along the Amtrak fence line. Hawks, Bald Eagles, and ravens flew over. After walking down to the pier at Dyckman Street and spending some time there we headed back into the park proper and up onto the ridge. It wasn't as birdy up there but there were things around. In the end we were in the park for about nine hours, leaving just before 5:00 pm. The entire bird list of 59 species, quite a good total for a late October day is below. On the way out of the park we looked for and Danny spotted a Vesper Sparrow that had been reported earlier. I only got a poor photo.
We also encountered some interesting mushrooms on the walk. I am certainly not a mushroom person. I rely on the iNaturalist app to identify them for me. Diane told us about the impressive poltypore and took us all to it.
Below is the full checklist for the day.
Brant  500     (Conservative estimate.)
Canada Goose  80
Mallard  30
American Black Duck  1
Hooded Merganser  1
Rock Pigeon (Feral Pigeon)  8
Mourning Dove  4
Sanderling  35  (Flock of very pale shorebirds flying down Hudson River; slightly larger than peep.)
Ring-billed Gull  15
Herring Gull  1
Great Black-backed Gull  1
Common Loon  1
Double-crested Cormorant  1
Great Blue Heron  4
Turkey Vulture  4
Osprey  2
Cooper's Hawk  3
Bald Eagle  2
Red-tailed Hawk  2
Belted Kingfisher  1
Yellow-bellied Sapsucker  1
Red-bellied Woodpecker  2
Hairy Woodpecker  1
Northern Flicker  2
American Kestrel  1
Peregrine Falcon  1
Eastern Phoebe  2
Blue-headed Vireo  1
Blue Jay  10
American Crow  5
Common Raven  1
Black-capped Chickadee  8     Very conservative number. Could easily be double that.
Ruby-crowned Kinglet  4
White-breasted Nuthatch  1
Carolina Wren  1
European Starling  20
Northern Mockingbird  2
Hermit Thrush  5
American Robin  5
Cedar Waxwing  1
House Sparrow  12
House Finch  4
Pine Siskin  20     Very conservative number. Part of continuing flight in the last week or so.
American Goldfinch  8
Chipping Sparrow  50
Field Sparrow  1
Dark-eyed Junco  60
White-crowned Sparrow  1
White-throated Sparrow  4
Vesper Sparrow  1
Savannah Sparrow  2
Song Sparrow  6
Swamp Sparrow  1
Red-winged Blackbird  1
Common Grackle  150
Nashville Warbler  1
Palm Warbler  4
Yellow-rumped Warbler  6
Northern Cardinal  1
Posted by Joe DiCostanzo at 7:51 PM