Another one of those strange spring days when the weather was all over the place. At sunup it was clear and sunny. Later it got overcast. It was windy most of the time. I went into the park for a bit around the middle of the day. While in the park there were snow and sleet flurries. A little while later it was partly sunny and then another sleet flurry came through. By the end of the day it was partly sunny again.

There were not a lot of birds around, though one of the highlights was an Osprey seen from the top of the ridge. Strangely, it was flying south. At the bottom of this post you will find a list of 27 species I recorded today.

One bit of local history Inwood Hill Park is famous for is that it is the site of the Native American village of Shorakapok of the Lenape people. Legend has it this is where Peter Minuit supposedly bought Manhattan Island from the Lenape in 1626.. I say legend since Native Americans did not have the same concept of land ownership the Europeans had so it is doubtful that they understood whatever transaction took place as being a "sale" of their land. All that aside, the shell middens of the Shorakapok village are still present in the park. The early spring is the best time to see them before they disappear under vegetation and leaf litter. Below is a picture I took today of a fairly complete oyster shell half surrounded by many small fragments of other shells. 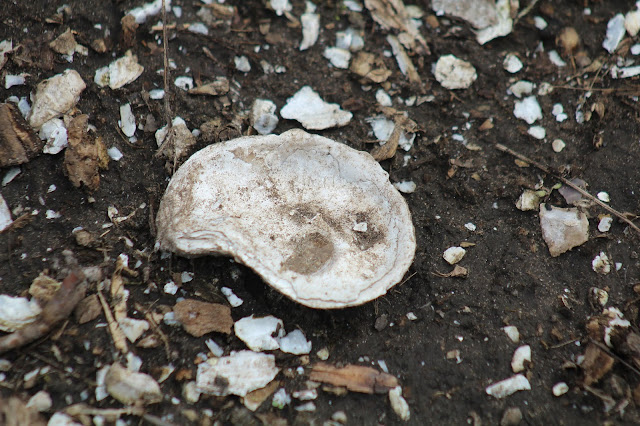