It was a lovely, sunny, but cool morning. I had an online meeting to attend in the early afternoon so I headed into Inwood HP in the morning. My goal was to finally find a Palm Warbler. Palms had been reported in the park by a number of birders over the last week or so, but I had yet to see one. As I crossed the soccer fields I ran into James Knox and he told me he had seen a couple of Palm Warblers up on the ridge. This was encouraging, but I have heard it before. The walk up the Clove was uneventful. At the southern White Pine grove up on the ridge it was fun to hear and see a male Ruby-crowned Kinglet flashing his brilliant ruby crown.

At the west edge of the Overlook Meadow I finally spotted a Palm Warbler! As far as I was concerned the morning's walk was a success. Moments later I was struck by a loud bird call somewhere inland from the overlook. It sounded like a loud Northern Flicker, but higher pitched. I thought, if I were almost anywhere north of the city I would identify that call as a Pileated Woodpecker. But in Manhattan? There have been previous records of Pileateds in Inwood Hill Park. I had had one myself on April 21, 2013. A few years before that a nonbirder in the park told me that a week earlier she had seen "a large woodpecker, the size of a crow, black with a bright red crest". Most descriptions of birds by nonbirders are unidentifiable, but that one is unmistakable. So, I knew I could be hearing a Pileated, but the odds were definitely against it. I tried to track down the bird, but it stopped calling after only a few calls. I continued searching to no avail. I decided not to report it since it seemed so unlikely and I hadn't seen the calling bird. A strange sounding flicker seemed more plausible.

I continued birding the ridge, spotting an Eastern Phoebe and my first Yellow-rumped Warbler of the spring. Then I headed home. I took the quick way down off the ridge using the switch-back trail that starts at the walled overlook above the Indian Caves. I had just gotten to the bottom when I received a text message from Danny Karlson. He had a Pileated Woodpecker in the Clove! I texted back asking where he was and quickly headed up the Clove to find him. On the way I heard a loud drumming off to the east which I realized could be the Pileated, but since I was almost to Danny I ignored it and met up with him. He said he had lost sight of the bird, but it had flown off in the direction of the loud drumming that we both had heard. Since the Pileated had now been visually confirmed by Danny I texted out word of the bird. Danny and I continued to try to refind the bird while other birders texted they were coming to look for it. First on the scene was Nathan O'Reilly. The three of us maintained the correct "social distance" while we watched and listened for the bird. Finally, I had to leave to get home for my on-line meeting. Danny left when I did and Nathan continued searching.

During my on-line meeting my phone started dinging with messages. The Pileated had been relocated. Then pictures of it taken by Rachael Joakim and Dawn Hannay  came through to further document the find. In the afternoon, Ann and I headed back into the park and hung out in the Clove watching and listening. Nadir Souirgi spotted it flying over and then we all heard it calling. Ann and I got a couple of other flight views of it high in the trees and heard it calling again up on the ridge. Finally, we left as the first few raindrops started falling.

Obviously the Pileated was the highlight of the day, but it was also my first two warbler day of the spring. My total list for the day was 30 species (below) and my grand total for the park so far this April is now 56. 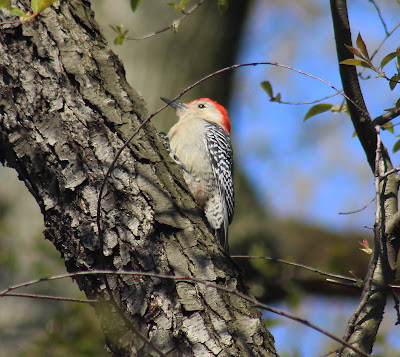 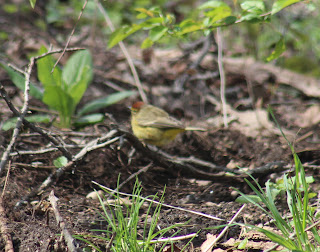