This morning I met Danny Karlson for a walk into Inwood Hill Park - birding while maintaining social distance. The weather was lovely, though cool, as it has been most of this strange spring. On the far west side of the soccer fields an Eastern Redbud was coming into glorious bloom.
The walk up the Clove was relatively quiet, though we did come across a Hairy Woodpecker feeding low down on a stump. Calling Northern Flickers have become a fixture of the woods in the last week. Calling White-breasted Nuthatches could also be heard pretty much anywhere you walked in the woods or on the ridge. The most excitement was in the vicinity of the Overlook Meadow. We picked out soaring Turkey Vultures over the Palisades across the Hudson. Then we spotted an adult Bald Eagle further to the north. A few minutes later there was an adult and an immature soaring over the middle of the river drifting south. When we started to leave the Meadow a Blue-headed Vireo flew by us and landed in a small tree and then started calling. The vireo was a first of the year for both of us. As we circled the meadow to head for the pine groves we heard an eagle calling overhead. Danny then spotted an adult perched in a tall tree in the middle of the meadow. Another adult flew in and landed in the tree above the first. There was considerable calling between the two birds and we watched as the lower one ate something in its talons. 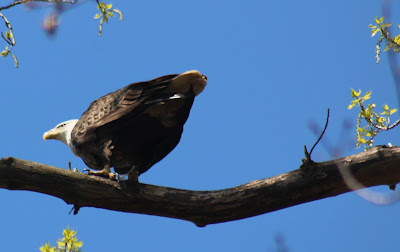 Finally, first one bird and then the second took off, circled overhead a bit and then moved on. Very quickly we spotted an adult and a juvenile circling overhead - perhaps these were the two we had seen over the river earlier.

Passing through the pine groves we added a Blue-gray Gnatcatcher to the day list. Coming back down the ridge from the area of the Henry Hudson Bridge tollbooths there was a Belted Kingfisher on the edge of the bay north of the soccer fields. I recorded 33 species on my walk and later in the day added one more when I spotted from my window a Great Blue Heron on the flats by Muscota Marsh.

Now half way through April my total for Inwood is 52 species, with 27 species from my apartment. The full day's list is below. 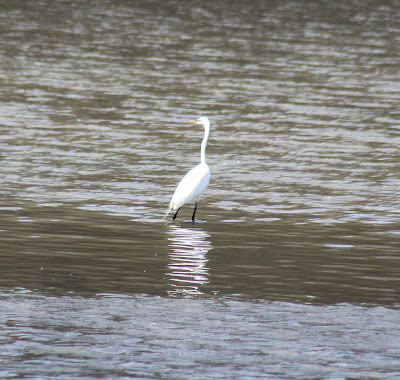