About the only thing the weather did not produce today was snow. It was sunny at sunup. then it turned cloudy. Shortly before noon it started raining. Then there were thunderstorms. Briefly, there was small hail. In the afternoon after the heaviest rains it got sunny again. On and off during the day it was windy. After sunset there were passing periods of light rain. Given the weather, I did not go into Inwood Hill Park today, but instead worked indoors and watched for birds from the apartment window at times. By the end of the day it was my best window list of the month so far. I totaled 21 species. None were new for the April Inwood Hill Park list, but Belted Kingfisher was new for the month's apartment list. I saw the kingfisher a number of times during the day flying around the small bay by Muscota Marsh and sometimes perching in the trees and once on the lights in the Columbia area. I even managed to get a poor picture of it across the bay from the apartment. There were also several Northern Rough-winged Swallows flying about.

In the morning Nadir Souirgi reported Common Loon migrating over the park. I watched for them (I have had them from the apartment in the past), but had no luck. I sent out a message to my WhatsApp group that I was watching for them, but my phone's autocorrect feature converted the message to say I was watching for migrating lions. I received a number of comments about that. 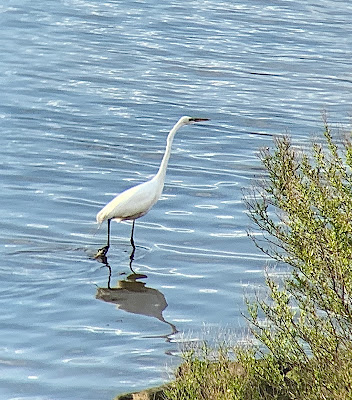 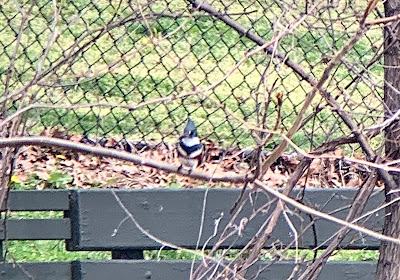