About 9:45 in the morning I picked up a year bird from my apartment window when I spotted an Osprey going east over the shipping canal. During the course of the day I recorded a total of 15 species from the apartment. In the afternoon I went for a walk up through the Clove in Inwood Hill Park and along the ridge. I picked up another three new birds on the walk: Fish Crow, Ruby-crowned Kinglet, and Brown-headed Cowbird. Two days ago I encountered my first Northern Flicker of the spring in the park. Today they seemed to be all over the park, rapping on trees and calling loudly. It was also only two days ago that I had my first Chipping Sparrow on the edge of the soccer fields. Today there were numbers of them on the field.

Up on the ridge, I encountered the following sign of the times. 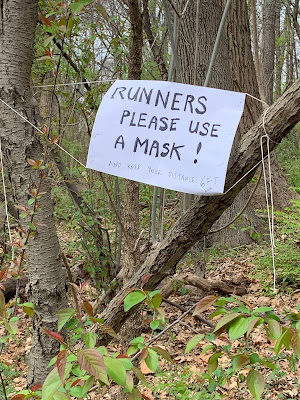 I encountered a number of runners in the park. While most were keeping their distance from each other and other park goers (except for a few pairs who were obviously running together), I would say much less than half of them were wearing masks. I can understand that it must be uncomfortable running wearing a mask, but it would seem that a runner is probably breeding harder than a walker and expelling their breath more forcefully. I think they really are being thoughtless.