Started a little later this morning at around 6:45 am. Barn Swallows were flying out from under the Columbia dock by their boathouse. I received a text from Danny Karlson that he had had a flock of Brant flying over a few minutes earlier. That would have been a new spring bird for me. Perhaps another day. I heard from Sean Sime that there were still thousands of Brant at Jamaica Bay. I hope more will fly north of Inwood and that I get to add them to my list. On my way over to meet Danny, Hilary Russ, and Diane Schenker at the nw corner of the soccer fields a Chipping Sparrow flew up from the ground and landed in a tree. A few weeks ago there were always Chipping Sparrows on the soccer field. Now it is a week or so since I had seen even one.

The four of us headed up onto the ridge. It was immediately obvious there were fewer birds than the last couple of days. Danny did spot a Peregrine falcon sitting on the top of the north tower of the Broadway bridge. He said he regularly sees them on his walk down from the Bronx. Since it was Sunday, no work was being done on the Henry Hudson bridge, so the noise level was much less than on recent days. Under the bridge, we found House Finch and a female Brown-headed Cowbird.
The ridge itself was much quieter than it has been. The one fairly birdy spot we found was the main path north of the Meadow Overlook above the Henry Hudson Parkway. It took us about 45 minutes to go over that short stretch since there were lots of birds, mainly a variety of warblers, but also Red-eyed Vireos and Scarlet Tanagers. Great Crested Flycatchers were active and vocal throughout this area. After leaving here it got quiet again.

Before getting to the morning's bird list, here are some photos of other natural history subjects seen today. First a fungus, a False Puffball (Reticularia lycoperdon). 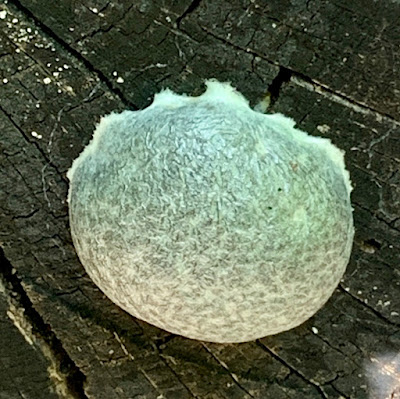 At the end of the walk, on the mud along the edge of the soccer fields  was a large Red-eared Slider sunning itself. 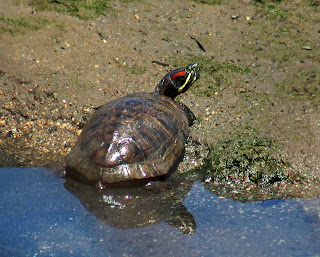 On the walk, I recorded 61 species of birds. The full list is below. I did not add anything to my spring list.

Posted by Joe DiCostanzo at 7:58 PM