Having spent two long days birding in the park I slept in this morning. I didn't get into the park until nearly 11:00 am. It felt quieter than the last two mornings though my total for the day of 54 species was my best day yet this spring. I just had to work harder for things. I ran into Nadir Souirgi early on and we birded together most of the time, joined part of the time by Rachael Joakim. I only picked up two new species for the spring: Great Crested Flycatcher and a briefly seen male Scarlet Tanager.

Before giving the full bird list, a couple of non-birder photos. The first is the flower of Common Dewberry (Rubus flagellaris), a prickly vine that can be unpleasant to get caught in, but that can be fairly pretty. 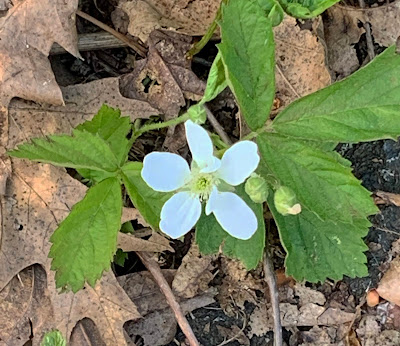 The second photo is of the Dryad's Saddle mushroom that I presented in yesterday's post. Today's picture is of the same specimen, but today when I photographed in I put my Leatherman tool in the picture to give some scale. The tool is four inches long.