An overcast, cool, raw morning in the park. In the early morning Nathan O'Reilly found a Marsh Wren in Muscota Marsh. I tried to spot it myself both from my window and when I was down on the deck before going into the park, but had no luck. In the park, I only managed to find 42 species, with one new species for my April/May total - a Blackburnian Warbler feeding in a tree up on the ridge with a Nashville Warbler in the same binocular field. It started raining at 1:00 pm and that is when I called it quits. Before I get to the bird list here are a few wildflowers I came across, most have been in bloom in the park for some time.
Recently, there has been a Chipmunk frequenting the upper stretches of the Clove path. This small ground squirrel is surprisingly scarce in the park. 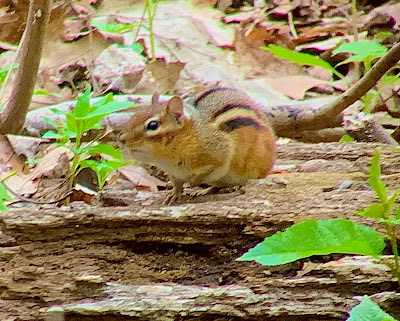