I spent over six hours this morning birding in Inwood Hill Park. Most of the time with Danny Karlson, but we were joined at times by Diane Schenker, Hilary Russ, and Rachael Joakim. It was a nice morning with warmer temperatures and a nice variety of birds, but fewer than yesterday. This was a surprise since the overnight winds and radar indicated a good flight of migrants.and most of us expected a better morning than yesterday. One surprise was the relative paucity of Black-and-white Warblers. Yesterday they were easily the most common warbler around. They seemed to be everywhere. This morning they were around, but in far fewer numbers.

I did end up with 50 species of birds (adding a Great Black-backed Gull from my window when I got home). That total included eight new species for my April/May list (in italics in the list below). I also heard a singing Baltimore Oriole from my window after getting home. My overall April/May list for the park is now 92 species with 37 from my apartment. Also seen from my window today was the first Canada Goose goslings I have seen this year.

Before getting to the bird list, a couple of non-bird photos. A very nice Tiger Swallowtail cooperatively posed in the Overlook Meadow when we were trying to track down a singing Yellow-throated Vireo. 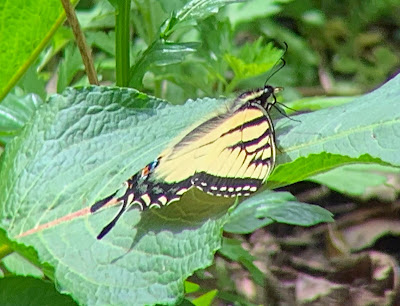 Growing on a dead tree stump on the eastern edge of the Overlook Meadow was this very large Dryad's Saddle fungus (Cerioporus [Polyporus] squamosus). It was larger than a large dinner plate. 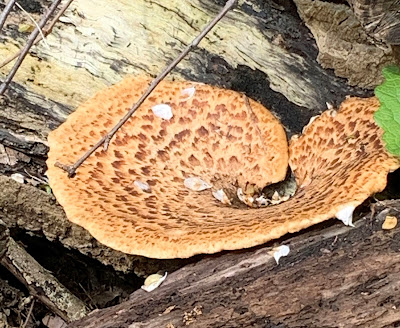 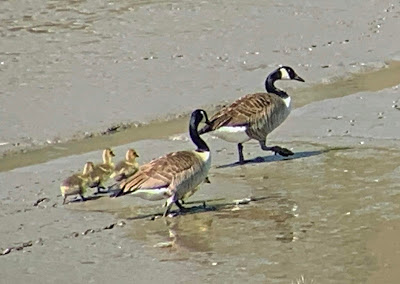 Posted by Joe DiCostanzo at 8:33 PM